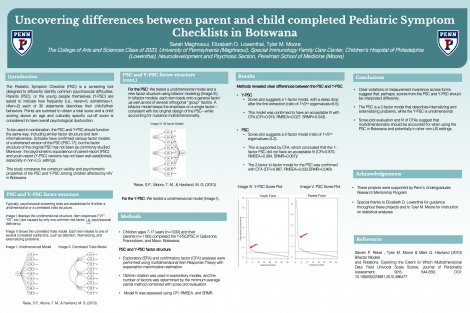 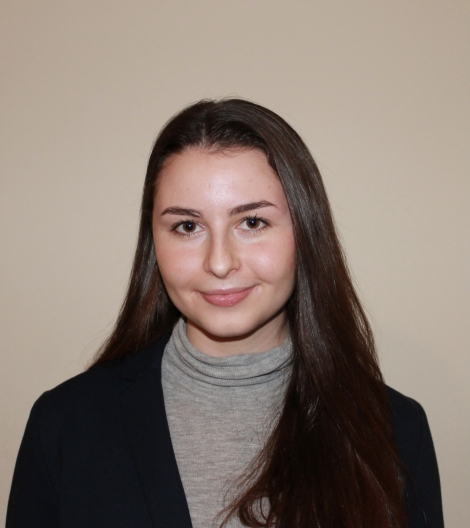 I am Sarah Maghraoui, an undergraduate student at the University of Pennsylvania on the pre-medical track. I am taking courses to major in Medical Anthropology & Global Health and to minor in Statistics. I am fascinated by how data can describe human behavior and can be used to make important clinical improvements in resource-limited settings. I am analyzing the factor structure of the Pediatric Symptom Checklist (PSC) administered in Botswana to understand how the tool can be best be used. In addition to research on the PSC, I volunteer as an EMT to directly serve my local community. I'm looking forward to continue researching and to attend medical school.

The 35-item Pediatric Symptom Checklist was designed to identify psychosocial dysfunction in children. Parent-report (PSC) and youth-report (Y-PSC) versions are widely used in the U.S., but their psychometric equivalence has not been well-established. To be used in combination, it is important that these forms function the same way regardless of the reporter. This study compares the construct validity and psychometric properties of the PSC and Y-PSC among children affected by HIV in Botswana.

All methods revealed clear differences between forms, obviating fine-grained measurement invariance analyses. The optimal model for the PSC was a 2-factor, and a 1-factor model was best for the Y-PSC. The 1-factor Y-PSC model had acceptable fit (CFI=0.974, RMSEA=0.027, SRMR=0.043). The 2-factor model for the PSC was tested using a bifactor configuration to retain an overall score. This model was confirmed (CFI=0.967, RMSEA=0.033, SRMR=0.049).  The correlation between the sum score and bifactor score was 0.83 (compared to 0.93 for Y-PSC).

Clear violations of measurement invariance across forms suggest that scores from the PSC and Y-PSC should be interpreted differently.  Multidimensionality should be accounted for when using the PSC in Botswana and potentially in other non-US settings.