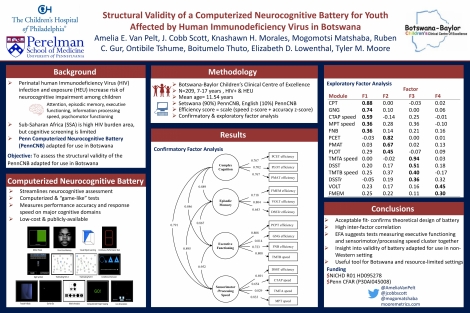 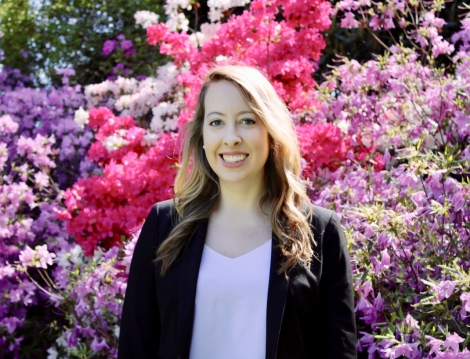 Amelia E. Van Pelt, MPH, is a PhD candidate in Epidemiology at the University of Pennsylvania. She holds a BA Degree in Spanish & Global Health, Culture, and Society, a certificate in Leadership, and a MPH Degree in Global Health from Emory University. She has experience in research and applied work in Latin America and Africa, as well as surveillance on a global scale. Her interests involve infectious diseases, vaccines, implementation science, and outbreak response. Her skills extend from laboratory sciences to statistical analyses, and she has collaborated with academic, government, and not-for-profit organizations.

Introduction: Human Immunodeficiency Virus (HIV) infection and in utero HIV exposure are associated with increased risk of pediatric neurocognitive impairment. In Sub-Saharan Africa, in utero HIV exposures and infection are common, but standardized cognitive screening is limited. To address the lack of available neurocognitive screening, the Penn Computerized Neurocognitive Battery (PennCNB), a tool that streamlines evaluation of neurocognitive functioning, was culturally adapted for use among youth in Botswana. The current sub-study examined the structural validity of the culturally-adapted PennCNB.

Methodology: A cohort of 7-17 year old children living with HIV (HIV+) and HIV-exposed-uninfected (HEU) children were enrolled from the Botswana-Baylor Children’s Clinical Centre of Excellence in Gaborone, Botswana. Confirmatory and exploratory factor analyses were performed on speed, accuracy, and efficiency measures for 13 PennCNB tests.

Conclusions: These findings provide valuable insight into the structural validity of a computerized neurocognitive battery adapted for use in Botswana, suggesting that the PennCNB could serve as a useful tool for the assessment of neurocognitive function in a non-Western setting such as Sub-Saharan Africa, thus providing advantages for implementation, such as automated scoring and data generation, increased standardization and reliability, and ease of administration.