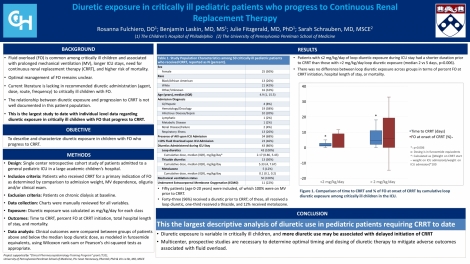 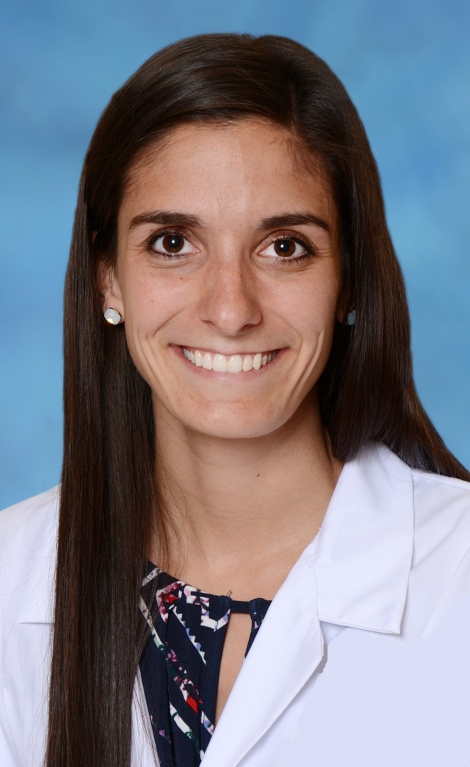 Rosanna is a second year pediatric nephrology fellow at the Children's Hospital of Philadelphia and a first year Masters of Science in Clinical Epidemiology student at the University of Pennsylvania. Her research interests are in the management of fluid overload in critically ill children with acute kidney injury and the pharmacoepidemiology of diuretic use in these patients.

Fluid overload (FO) is common in critically ill children and associated with substantial morbidity, including prolonged mechanical ventilation (MV), longer hospital stays, need for continuous renal replacement therapy (CRRT), and higher risk of mortality. The optimal management of FO remains unclear. Current literature on recommended diuretic administration to critically ill children with FO and the relationship between diuretic exposure and progression to CRRT is lacking. In this study, we aim to describe and characterize diuretic exposure in children with FO who progressed to CRRT.

This is a single center retrospective cohort study of pediatric patients admitted to a general pediatric intensive care unit (ICU) in a large academic children’s hospital who progressed to CRRT for a primary indication of FO as determined by comparison to admission weight, MV dependence, oliguria and/or clinical exam. Charts were manually reviewed for all study variables (sex, age, admission diagnosis, presence of any acute kidney injury (defined as at least KDIGO Stage 1), MV status, percent FO at ICU admission). Diuretic exposure during ICU admission was calculated as mg/kg/day for each medication class. Outcomes included time to CRRT, percent FO at CRRT initiation, total hospital length of stay, and mortality. Clinical outcomes were compared between groups of patients above and below the median loop diuretic dose, as modeled in furosemide equivalents, using Wilcoxon rank-sum or Pearson’s chi-squared tests as appropriate.